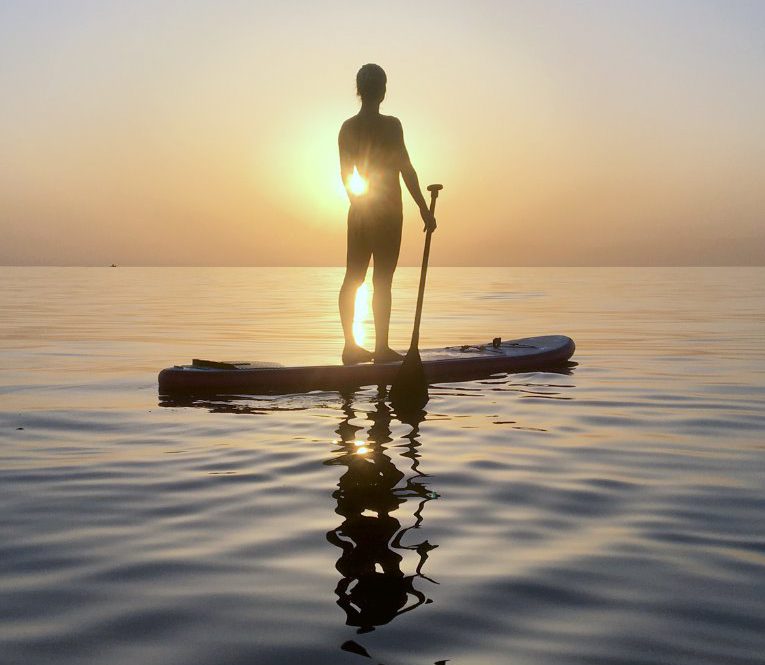 “The best moments in our lives are not the passive, receptive, relaxing times… The best moments usually occur if a person’s body or mind is stretched to its limits in a voluntary effort to accomplish something difficult and worthwhile.” ~ Mihaly Cskikszentmihalyi

A Flow state – Total immersion in a task, a feeling of complete concentration, and losing track of the outside world.

Researchers describe flow as a unique state of concentration in which action seems to be effortless. Whether painting, writing, planning, scheming, inventing, or running a 10K, you feel alert, unselfconscious and totally absorbed in the present moment.
Flow is a state entered when you are performing at your peak or stretching beyond former limits. Emotions are positive and energized, yet your attention is so focused on the task at hand that you may not be aware of feelings at all except in retrospect. Everything but the task is forgotten—time, surroundings, even yourself. Awareness and action become one.

Flow is a concept developed by Mihaly Cskikszentmihalyi of the University of Chicago, who has studied the phenomena his whole career.

Cskikszentmihalyi defines flow as “a state in which people are so involved in an activity that nothing else seems to matter; the experience is so enjoyable that people will continue to do it even at great cost, for the sheer sake of doing it.” ~ Mihaly Cskikszentmihalyi

According to Cskikszentmihalyi, flow is completely focused motivation. It is a single-minded immersion and represents perhaps the ultimate experience in harnessing the emotions in the service of performing and learning.
In flow, the emotions are not just contained and channelled, but positive, energized, and aligned with the task at hand. The hallmark of flow is a feeling of spontaneous joy, even rapture, while performing a task although flow is also described as a deep focus on nothing but the activity – not even oneself or one’s emotions.

There are a number of different elements involved in achieving flow:
1. There are clear goals every step of the way.
2. There is immediate feedback to one’s actions.
3. There is a balance between challenges and skills.
4. Action and awareness are merged.
5. Distractions are excluded from consciousness.
6. There is no worry of failure.
7. Self-consciousness disappears.
8. The sense of time becomes distorted.
9. The activity becomes an end in itself.

A flow state can be entered while performing any activity, although it is most likely to occur when one is wholeheartedly performing a task or activity for intrinsic purposes. Passive activities like taking a bath or even watching TV usually don’t elicit flow experiences as individuals have to actively do something to enter a flow state

A brilliant Example of flow from Pursuit of Happiness
You are skiing down a mountain trail at Aspen Colorado — one of the expert diamond slopes, with the awe-inspiring, snow-capped Rockies in your view. Though you have skied down this slope before, you have never been able to “dominate” it — until now. You begin to hit your stride, striking every mogul perfectly, effortlessly. Your actions seem frozen in time and every little sound becomes more intense — the crisp slap of your skis against the powder, the scrunch of your knees, and your rhythmic breathing. You are flowing down the slope, and later you might even describe yourself as having become “one with the mountain.” All those years of training and struggling, taking ski lessons and tumbling into the woods, are now finally justified. You have had, quite literally, a peak experience.

Flow can be achieved by many other activities that don’t require such elaborate commitments. One can achieve such a state while skiing, fishing, surfing, certain hobbies or games, playing the guitar, cooking, reading, or even having a conversation and eating food.

How to Achieve a State of Flow

According to Psychology Expert Kendra Cherry the following points are necessary to find your flow.

1. Your skills need to be well-matched to the task. According to Cskikszentmihalyi, flow is most likely to occur when your skill level is perfectly aligned to the challenge that the activity presents. So a runner might experience flow during a marathon that he or she is well-prepared for, or a chess-player might reach this state during a game that presents the perfect challenge.

2. In some cases, striving for something that challenges your existing skills can lead to a state of flow. A slight stretching of your skills, or attempting something that is a little more advanced than your current abilities, can also foster a flow state. For a dancer, this might involve attempting a move that presents a bit of a challenge. For a graphic designer, it might involve taking on a project that requires utilizing a new type of software.

3. Have clear goals. You need to have a specific purpose for focusing on the task, such as winning an athletic contest, playing a particular piece of music, or finishing a work project.

4. Avoid interruptions. It is important to devote all of your concentration to the task at hand. Multitasking and other distractions will disrupt the flow state.

5. It is essential to focus on the process and not the end state. While having a goal is important, flow requires enjoying the journey and not just fixating on the end product.

The similarities between Yoga and flow are extremely strong; in fact it makes sense to think of Yoga as a very thoroughly planned flow activity. Both try to achieve a joyous, self-forgetful involvement through concentration, which in turn is made possible by a discipline of the body. ~ Mihaly Cskikszentmihalyi

There is an obvious link between flow and the Buddhist concept of mindfulness, or the kind of attention involved in meditation and yoga. You can better understand why some people choose to spend so many hours contorted in such strange bodily positions: they are achieving a deep flow-like state and hence a strong sense of inner control and harmony.

The ultimate goal of Yoga is to achieve a state called moksha, a liberation from the self, described as combining three main qualities: sat-chit-ananda, or being, consciousness, and bliss. Using the flow model to describe spiritual practices such as yoga may help to explain why people who engage in such practices seem to be so happy and peaceful.

Daniel Goleman (Emotional Intelligence: Why It Can Matter More Than IQ) suggests that flow is “emotional intelligence at its best”. Not only are feelings incredibly positive (rapture, spontaneous joy), all of the usual emotional static is absent. In flow, senses, feelings, actions, and thoughts are perfectly attuned and you respond to feedback from the task or activity itself.

Sit and think about activities that may bring you to a flow state. Consciously recognise how beneficial this time and how invested you are in this activity. Schedule more time to spend in this state, the best way to commit to an activity is to schedule it into a planner and share your commitment with another person.

Leave in the comments below your activity that brings you to a flow state of mind.